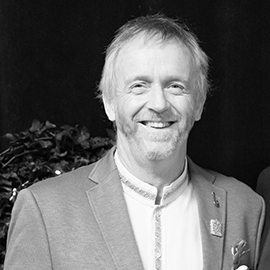 Anthony has volunteered on numerous boards and committees with the Landscape Newfoundland and Labrador Horticulture Association (LNLHA) and the CNLA. Volunteering with the CNLA has made him “totally engaged in the horticultural industry and, in many ways, more so than I’ve ever been,” he said.

Anthony O’Neill was bitten by the gardening bug at an early age from the influence of his father, Joe O’Neill, who was the family alarm clock every summer morning. Joe would knock on everyone’s door at 6 a.m., shouting “‘get out of bed! We’ve gotta get out in the garden before it gets too hot,” Anthony recalled.

Anthony’s parents Joe and Teresa owned and operated Shop n’ Save, a grocery store that sold meat, produce and houseware items from 1960 to around 1990. When Joe kept stocking the grocery store shelves with overflows from the gardens, that's when the O’Neills decided to switch gears, changing the name of Shop n’ Save to O’Neill’s Gardenland, and turned the family hobby into a full-time passion.

O’Neill’s Gardenland signed up to be a member of the Landscape Newfoundland and Labrador Horticulture Association when it was formed in 1992. Anthony’s multiple decades of volunteering began when he joined the new LNLHA’s Board of Directors. He joined the CNLA Board as representative of LNLHA and later joined Garden Centres Canada, a commodity group within the CNLA, for about 12 years before moving on to the executive level of the CNLA as president.

He said that what makes the national association so special is its “phenomenal” Board of Directors.

“They give so freely of their time, and they’re so passionate about their profession and that exudes energy into anyone who joins the board,” Anthony said.